It feels like I’ve been away for a while, in more ways than one.  I was actually out of town last weekend, for a women’s retreat with my church….but I think I’ve been mentally checked out since I went back to work on August 1st.  My job tends to consume me for a month or two when a new school year starts.  I have managed to eke out a couple of blogs in that time, but I just realized today that it’s been two weeks since my last post!  That just won’t do.  I remembered, though, that I had a couple of picture folders ready to go…so here’s my favorite french fry recipe!

If you are a regular reader, you may remember the recipe that I posted back in the spring for microwaved potato chips.  That recipe was created by my favorite low-fat chef, Devin Alexander, and was featured in her book I Can’t Believe It’s Not Fattening.  I have all of Chef Devin’s book, including the first one-and probably my favorite-Fast Food Fix.  In Fast Food Fix, Devin breaks down lots of popular fast food recipes and makes them healthy and low-fat.  Sold!  I’ve been making tacos, fast food style burgers (Big Mac clone, anyone?), and fantastic fries from that book for five years.  This recipe is an adaptation from the fry recipes that she presents in that book.  It doesn’t follow any of the recipes 100%, but it uses her techniques for getting perfect, crispy baked fries.  If you’re like I was five years ago when I first got this book, you have tried and tried to make healthy, baked fries….but always come up short.  I promise that if you use this recipe, you won’t be disappointed!

The first thing that you need to do is preheat your oven to 450 degrees.  A hot oven is paramount to perfect fries!  Of course, I preheat my Pampered Chef stoneware bar pan…this cuts about 5 minutes off of the baking time.  If you don’t have stoneware, though, just know that I made these fries for years on a metal baking sheet.  No biggie!  Then, set a big pot of water to boil.  I use my 4-quart pot.

Don't forget to boil the water! This might be the most important step. This is a 4-quart pot....

The next step is to scrub some Russet potatoes.  I am generally making fries for two; if I have large potatoes, I’ll use one…if the potatoes are smaller, I’ll use two or three.  The key is to cut up the potatoes and eyeball the amount to see if you have enough.  If not, just cut more!  I use a vegetable brush to scrub the potatoes then dry them with a paper towel.  Slice the potato into planks, then stack the planks and slice them into sticks.  You can make them as thick or as thin as you like.  Sometimes I use a crinkle cutter instead of a knife.  As you slice the potatoes, drop them into a bowl of cool water; this will help to remove some of the excess starch and keep the potatoes from turning brown while you finish cutting.

For this batch, I used a giant potato. Sometimes I peel them, sometimes I don't. Usually.....I don't.

When the water boils, add a “goodish” amount of salt.  I don’t really measure, but I probably use a teaspoon or two.  Once you have salted the boiling water, use a spider or a slotted spoon to carefully drop the fries in.  Boil them for three minutes-no more, no less-then drain them and let them stand in the colander.  Like soaking the fries in cool water, boiling them will draw out the starch, which will help them to crisp.  Did you know that most restaurants actually double-fry their French fries?  The first fry draws out the starch, and the second fry crisps them up.  Oh, and the fries you get in the frozen section at the grocery store?  Already fried once.  That’s why you can bake them and they still crisp up.  Anyway….this mimics that process without all that deep-frying.

Don't leave out the salt! You will salt the outside, but potatoes really need quite a bit of salt to taste perfect!

Be careful that you don't splash boiling water on yourself!

See all that starch that's left behind?

Drain them, then give them a good shake....

After the five-minute draining process, I like to roll my fries up in a clean (and non-fuzzy!) kitchen towel to get all of the excess moisture off of them.  Once I have done that, I spread them out on the pan and spray them with oil from my handy-dandy Misto.  After spraying them, I sprinkle them with salt (in this case, seasoned salt), then slide them in the oven.  I flip/stir them every five minutes while they are baking and remove them when they reach the brownness/crispness that I want.  With stoneware, this takes about twenty minutes; with a metal baking pan, about 25-30 minutes.  I promise that these are the best baked fries that you will ever have!

To get them as dry as possible, spread them on a towel...

...then roll them up and give them a squeeze. Don't squeeze too hard, though, or you might break them!

I use my stoneware for just about everything these days!

The Misto is a pretty handy tool as well.

I didn't get any pictures of the "flipping" process, but here's the finished product. These fries are so good. You may never deep-fry again!

2 thoughts on “The Best Baked Fries EVER”

Thanks for leaving a comment....but remember that Chattavore is a positive site. Keep your comments nice! Negativity will be deleted. Cancel reply 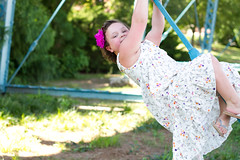